Dana's Downloadable Album of the Month for October, 2004
HALLOWEEN SPECIAL!
"AT HOME WITH THE MUNSTERS" 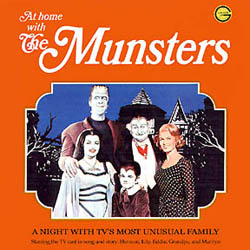 Here's a rare one: The Munsters' record from 1964. This LP was recorded by the original cast to cash in on the success of the television show, which debuted in September, 1964. Universal TV Productions were the masterminds behind the series, and since they owned the rights to most of the classic horror films ("Frankenstein", "The Mummy", etc.), a crazy '60s sitcom seemed in order.

"The Munsters" came out during the same television season as Filmways Productions' "The Addams Family." I was in 4th grade that year, and became a devout Addams Family fan. In those days, you were either a "Munsters" fan, or and "Addams Family" fan. The Addams family just seemed cooler!

"At Home With The Munsters" captures the nutty ambiance of the show, with appearances by all the cast members. Each actor gets his own song to perform, although it's obvious that Eddie Munsters' song is performed by another child, and I suspect that Marilyn's song was not performed by Pat Priest, the main actress who played the "homely" neice of the Munsters.

This album has been going for big bucks on Ebay lately (around $70) and I'm sorry to say that I don't actually own a copy of it! Thanks to my friends, I'm able to offer this rare Halloween gem to you all. Thanks to Jeff Chenault for the front cover scan, Dale Yarger for the BACK cover scan, Lorenzo Walker for the original sound files, and to Frank M. Young for painstakingly restoring the crackly LP sound to pristine digital quality!

I've included CD label art, if you're so inclined, as well as full tray art. Fold the tray art in half, and insert into a CLEAR CD case.

I've also zipped all the mp3 files into one file, as well as all the art into another zip file, to make it easy to download without having to hover over your computer for a long time.

Happy downloading and Happy Halloween!
- Dana
At Home With The Munsters - mp3's
Each mp3 file ranges in size from 1.4 to 2.4 megs.

Munsters' fans have stopped by!

music lovers have visited this site overall ...thanks!